After a 2014 scandal uncovered long wait times and insufficient care from VA facilities, Congress passed legislation that expanded veterans’ access to healthcare and enabled them to visit non-VA hospitals for treatments. However, even though the Department of Veterans Affairs was supposed to pay as a secondary payor for veterans who had other insurance policies, they never followed through—leaving millions of dollars unpaid for hospitals nationwide.

Find out how partnering with Aspirion can turn the tedious, time-intensive process of pursuing VA claims into a wealth of revenue for your facility. 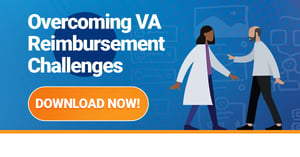 Since 2016, 72,000 veterans have received denials from the VA stating they will not pay as a secondary payor to a veteran’s other health insurance. As a result, veterans have erroneously faced financial burden, and hospital reimbursement has suffered tremendously. But now, thanks to a recent court ruling, health systems are closer than ever to getting the payments they are owed.

After several years of deliberation and class-action lawsuits, the VA has finally prepared a plan to reconsider VA secondary claims. In September 2019, the United States Court of Appeals for Veterans Claims mandated that the VA must reimburse veterans for out-of-pocket emergency medical expenses not covered by veterans’ health insurance contracts, such as deductibles and coinsurance amounts.

As of late May 2020, veterans who have other health insurance primary to VA benefits are being reimbursed if they have paid out-of-pocket for deductible, cost share, or coinsurance. The VA is also reconsidering medical claims that have previously been denied due to the VA stating they would not be responsible for a veteran’s deductible, cost share, or coinsurance from another insurance.

This new ruling not only benefits veterans, but also the non-VA facilities that have provided their care for little or no reimbursement. VA secondary claims that have been denied since 2016 are eligible for resubmission and reconsideration—but this process is time-consuming for your facility’s already-busy staff. Don’t risk making errors that could delay your reimbursement further. Reach out to our team to start getting the money you’re owed on your VA claims.

Since 2008, Aspirion has offered a growing array of RCM services for hospital, physcian group, and provider systems looking for better results in managing their most complex reimbursements. Aspirion has been and continues to be a trusted partner to many of the most prominent providers in the U.S.

At Aspirion, we help hospitals and physicians recover otherwise lost claims revenue from motor vehicle accidents, workers compensation, the Veteran’s Administration, and Tricare as well as out-of-state Medicaid, Medicaid eligibility, underpayments and denials. Our experienced team of healthcare, legal, and technical professionals combined with industry-leading technology platforms help ensure that providers receive their Complex RCM revenue so that providers, hospitals, and their staff can focus on patient care.